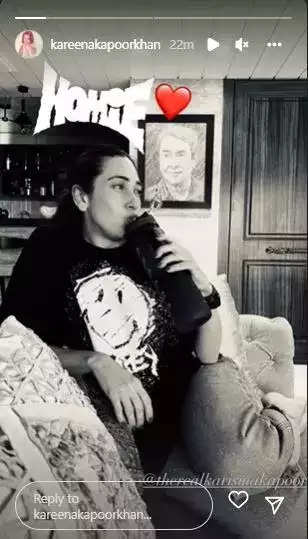 In the photo, Karisma is seen looking cool as a cucumber as she sipped water from her bottle on a couch. Kareena captioned the post, ‘Homie’, followed by a red heart emoji. On the wall behind Karisma was a sketch of their father, Randhir Kapoor.

Karisma might be away from the silver screen but she is quite active on social media. The actress is often seen sharing pictures and videos of herself with her fans. She is also often seen hanging out and partying with Bebo, Amrita Arora and Malaika Arora. Their girl gang also jet off to exotic locations for a vacation.

On the work front, Kareena was last seen in ‘Laal Singh Chaddha’ co-starring Aamir Khan. It also featured actors like Mona Singh and Naga Chaitanya in key roles. The film, which released on August 11, failed to impress the audience and the critics alike.

Next, the actress will be seen making her digital debut with ‘The Devotion of Suspect X’ co-starring Vijay Varma and Jaideep Ahlawat. Apart from this, she has also been roped in for Hansal Mehta’s untitled next.

Ponniyin Selvan: Kamal Haasan reveals that Rajaraja Chola could not be a Hindu king because the religion was non-existent in that era : Bollywood...

Sidharth Malhotra reveals his first paycheck was Rs. 7000; ‘was daunting to debut in Student Of The Year’ : Bollywood News